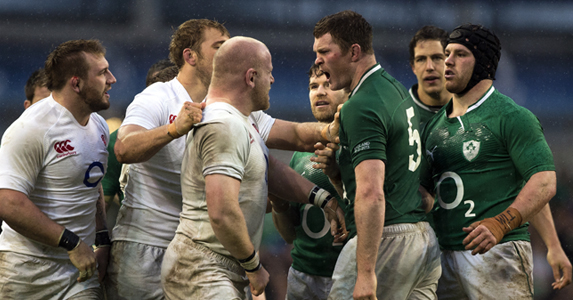 The last 12 months have entailed both the very best and most frustrating aspects of this current Irish rugby team. So close in South Africa, then exceptional in Chicago. Gutsy against Australia, caught cold in Edinburgh, followed by sleeves rolled up efficiency and toughness against France. Then a return to old failings in Cardiff last weekend. After a truly mixed season, Ireland return to the place where they so often thrive, backs to the wall and with little expectation.

If the plethora of ‘ifs’ had gone our way in the past six weeks alone, the last few days would have been filled with the fever pitch that only accompanies a Grand Slam showdown. Instead and after a listless opening forty in Edinburgh and, as with 24 months ago, a performance in Cardiff where plan B was clearly left at home, Ireland face England with no tangible wares on the line. They do, however, have an opportunity to measure themselves against the world’s second best side and prevent two records falling. England, meanwhile, have the chance to record the first back-to-back Grand Slams in Six Nations history and break the record of eighteen straight victories held, of course, by themselves and New Zealand. There is no question as to whose winning streak is more impressive but should England prevail on Saturday the history books won’t lie.

The question for Ireland, after the harsh reality of our inability to break down defences without going through multi-phases, is whether we can live with a side who are now marrying potent offence with the discipline which Eddie Jones immediately instilled on his arrival in 2016. The rather frustrating and none too illuminating answer is that, yes, on one off occasions we can live with any side in the world. Therefore, if Ireland win on Saturday where does it leave them, apart from the obvious position of a fairly distant second behind England and marginal leader of the chasing pack.

If you examine the 11 game run which begun last June at the foot of Table Mountain and led into last Friday night’s all too familiar defeat in Wales it’s clear that Ireland are a good side that can deviate from brilliant to decidedly blow average. Nothing revelatory there. However, perhaps of more relevance is the fact that Ireland succeed when their set-piece performs to a markedly superior level to that of their opposition. New Zealand and Australia struggled mightily against the Irish scrum, while the line-out provided a match-winning platform in Chicago. Disrupt Ireland here and it would appear that they are bereft of ideas.

The Irish management team are growing increasingly prickly towards journalists who ask whether Ireland have become either too predictable or are lacking in offensive thrust. Scratch too close to the bone and people generally become uncomfortable. To an untrained eye, last Friday’s attack seemed to revolve around flat one or maybe two out runners and a brand new trick….. the wraparound. The latter generally led to an isolated Keith Earls or Simon Zebo kicking ahead into space and chasing. From such great coaching minds, it hardly smacks of ingenuity. 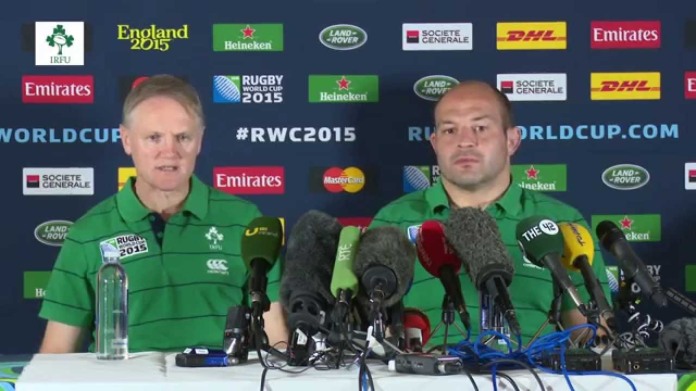 Irish rugby journalists have committed the cardinal sin of both doing their job and asking relevant questions at recent press conferences.

Barring the ten-try evisceration of the then 14th ranked team in the world in Rome, Ireland’s attack has struggled mightily throughout this tournament. Scotland’s defence can be charitably described as average, while to be fair the French encounter was never going to yield a great attacking dividend given the conditions. Wales, in Cardiff however provided a perfect marker as to the progress Ireland have made offensively since the uncannily similar defeat in 2015. The answer, it would seem, is very little.

Despite his excellent performance in Cardiff, for the sixty minutes Johnny Sexton played last weekend Ireland struggled to create any real opportunities, the two best breaks of the game coming from Donnacha Ryan and CJ Stander. For all of Robbie Henshaw’s strengths he is not, at least yet, a midfield creator in the mould of Jeremy Guscott or Tim Horan. Of course, he is still an outstanding defender and carrier and there is the hope that his game can develop along a similar line to that of Ma’a Nonu. However, in the short term Ireland need something beyond Sexton’s often isolated efforts, so Jared Payne’s inclusion should at least offer the option of a playmaker from the back.

England, more as a result of serendipity than design, have happened upon an outstanding 10-12 axis, with Owen Farrell operating as a first five-eighth outside George Ford. Both are excellent distributors, Ford is a genuine running threat and Farrell complements these skills with huge, often times punishing defence. Ireland won’t be fooled into thinking they’re running at a converted out half in Farrell meaning Ford’s rush defence, highlighted by Gordon D’Arcy in this week’s Irish Times, needs to be exploited somehow. 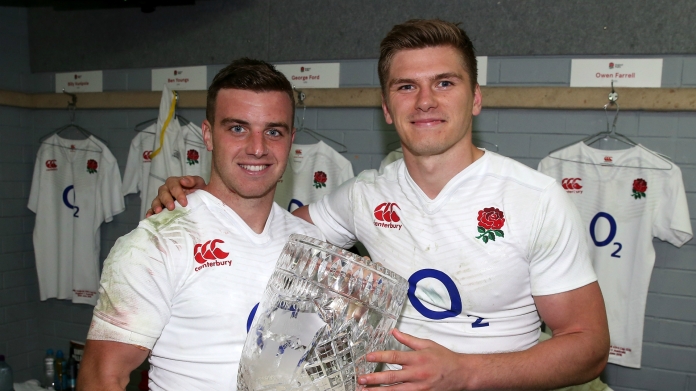 There has been much talk of Ireland’s structured system which is possibly predicated on the fact that carefully managed phase play eventually leads to gaps appearing, somewhat akin to chess. The problem with this kind of rugby is that it grows stale in a hurry when it becomes ineffective. For all the pressure imposed by Ireland last week, and the herculean Welsh defensive performance should not be taken for granted, the closest the visitors came to scoring was from a rolling maul.

Owning the ball in rugby doesn’t quite equate to soccer, where the objective is to press and probe until an opening appears. If rugby, as structured phases amass, the defensive line become more comfortable with their assignment. Maybe Ireland have a rabbit in the hat for Saturday’s encounter but the one time they tried a semi-coherent move off an attacking scrum last week Keith Earls spilled it, perhaps mindful of the fact that the Welsh midfield had telegraphed the move from the off.

Further, and as has been the case throughout this year’s Six Nations there is the issue of Ireland’s back row. From the limited sample size on offer, it appears that the combination of CJ Stander, Sean O’ Brien and Jamie Heaslip is actually less than the sum of its parts. The problem of course is that Stander was the best of the trio last week, Heaslip appears to be nigh on undroppable and with Josh van Der Flier out, there is a lack of experienced depth on the open side. There is a persuasive argument for Peter O’ Mahony’s inclusion but at whose expense? Schmidt is, not unreasonably, keeping the incumbent combination together for the tournament finale but if they are unsuccessful in stymying England, no small achievement, then others – O’ Mahony, Dan Leavy, Jack Conan- will have to be considered going forward. 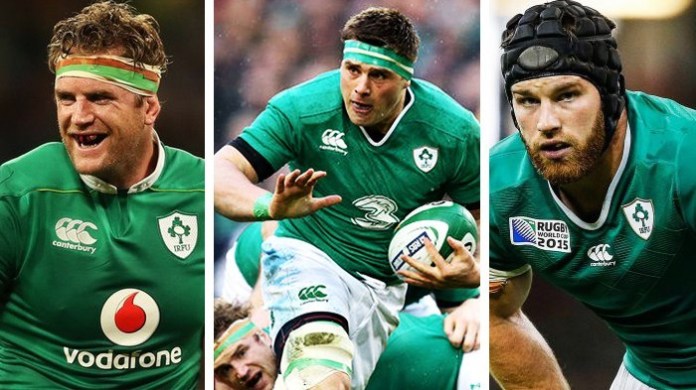 The Six Nations have thrown up a mixed bag for the Irish back row so far. A big performance on Saturday would offer huge respite.

Ireland have become all too familiar with life without Johhny Sexton in the past eighteen months and now, with a juggernaut coming to town, they must contend with the absence of their other backline lynchpin, Conor Murray. Kieran Marmion will surely relish his opportunity and given his presence and the inclusion of Payne Ireland will probably attack with greater tempo and, dare we dream, invention.

The coaching team have spoken this week of the need to be clinical in opposition territory. England appear to be a performance ahead, at least, in this regard after last week’s demolition of Scotland. Ireland won’t wilt like the disappointing Scots did but nothing thus far in this year’s tournament suggests they’ll be able to repel and breakdown a flourishing English side, buoyed further by Billy Vunipola’s return to the starting line-up. The visitors are on a discernible upward curve while Ireland, ironically given the methodical nature of their play, remain difficult to read.

The frustrating, or perhaps brilliant aspect of this Irish side, is that they remain capable of beating anybody when their up-tempo pace complements a dominant set-piece. England, though, will be primed for an emotional performance from the home side, particularly after being stung in 2001 and 2011 when hunting Grand Slams. Outside of England it’s unlikely that anyone wants Eddie Jones to succeed where all others have failed before him. But in a week where Queen Elizabeth II gave the royal nod for Brexit talks to commence, it seems likely that England will successfully impose their superiority in a more anodyne, sporting manner.

Straight Up Sport Prediction: England by 4