Before we go  any further, let’s just park any grievances we have regarding last week’s encounter with New Zealand and their excessive physicality, cynicism or whatever you want to call it. The Kiwis came correct, as it were, for a brutal encounter and did everything they had to, including those illegal acts that Jaco Peyper and his gormless assistants should have punished.

Now, of course, like every other Irish person watching, we were irate at the time but perspective and clarity, naturally enough, follow the event. Are New Zealand dirty? No, but more importantly, who cares? In a game where you’re trying to physically dominate and suppress your opponent, teams will often do what they can.

The responsibility lies with the officials, in all sports, to draw the line at what is and is not acceptable. Take last week’s light heavyweight boxing championship match between Sergey Kovalev and Andre Ward in Las Vegas as an example. Ward, a Californian defeated the unified champion, Kovalev , a Russian, in a bout scored unanimously 114-113 by the American judges. Now, for those who watched the fight, you could say it was a mildly controversial call but certainly not a travesty or a fix. 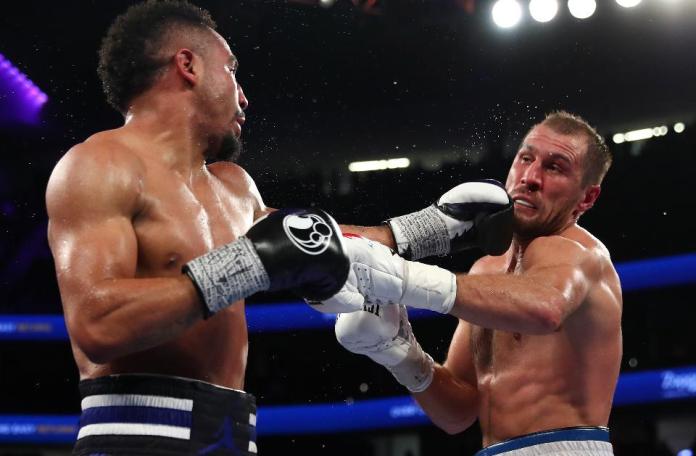 Ward, a frustratingly, brilliant technical fighter gained traction through excessive holding and wrestling with the much more, destructive puncher, Kovalev, almost from the opening bell. Now, referee Robert Byrd could have had a word with Ward early on regarding his relentless holding, particularly after Kovalev’s explosive right in the second, but he didn’t and the challenger took advantage. Kovalev likely lost poise, and more importantly power reserves, in the deceptively energy sapping clenches which ensued. This was an extremely smart move by Ward that could have been stopped by Byrd, but it wasn’t and now, hopefully, we get a chance to see a supremely pissed off Kovalev take on Ward in the near future. Digression aside, the likelihood is that in the rematch Kovalev’s camp will be at pains to ensure that Ward’s tactics are brought to the next referee’s attention early and often.

New Zealand and Andre Ward simply worked the referees. Peyper, is frankly, a useless referee when it comes to disciplining foul-play – you need only look to the violent, illegal hits on Dave Kearney and Johnny Sexton in Paris in February – so, on what reasonable grounds was he appointed referee this game? Surely, Ireland would have politely requested a superior, and if possible non-SANZAR referee, but Peyper was the incompetent lot they were given. New Zealand have nothing to answer for here. Or to borrow and criminally butcher the words of the great Mike Lowrey, ‘don’t hate the players, hate the ref, his grossly incompetent TMO, and maybe World Rugby just a little bit.’

On Saturday, Ireland and Australia will have to deal with Jerome Garces, a man who both sides seem to have a bit of beef with. On that note, let’s park the referee issue. Michael Cheika has made ten changes to his match day squad from last Saturday’s late resistance of France in Paris. It’s a strange and sad sign of the times for French international rugby when a southern hemisphere side targets the Parisian encounter of a winter tour as the opportunity to give a few players a breather.

Cheika and Australia will probably regard this as the lesser as the next fortnight’s challenges – England have been given a very manageable winter schedule – but he’s astute enough to know the challenges Ireland will bring. Assuredly, Australia will not allow Ireland the same control of possession as their defence is not in the same league as the Kiwis. And, in David Pocock and the returning Michael Hooper, they have two of the foremost ground technicians in world rugby.

The pair performed extraordinarily throughout Australia’s surprising run to last year’s World Cup final and they will be integral to the visitors attempts to consign Ireland to back-to-back defeats. It’s going to be a relentless dogfight on the ground, and where New Zealand withdrew and realigned, Australia will launch themselves ferociously. Both will also look to use stolen ball to release Bernard Foley, the monstrous Kuridrani and potential, game-changer, Israel Folau.

Joe Schmidt seems to have found another well-balanced, back row, and it will be most instructive to see how Sean O’ Brien, Jamie Heaslip and CJ Stander perform against the two best back rows in the world on six days rest. O’ Brien was truly immense on his latest return from injury, carrying powerfully, dominating contact and, were it not a handling error, may have scored a decisive try. Heaslip appears to be playing his best ever rugby, with his unseen work now being accompanied once more by the powerful running so prevalent in Ireland’s 2009 Grand Slam run.

Meanwhile, Stander gets another opportunity to build on a fantastic performance in Chicago after his unfortunate departure last week. It’s probably a bit petty and whimsical but there’s a degree of schadenfreude in seeing Stander – who was apparently told he was too small for international rugby back home – emerge victorious against New Zealand while South Africa slumped miserably to record defeats, for very different reasons, against New Zealand against Italy. Stander’s rise has been prolific, after a difficult first season in Munster, and his raw passion and abrasiveness have made him a firm favourite with Irish rugby supporters. If anything, his success and popularity only further muddy the waters of the three-year residency rule.

Ireland’s midfield is, barring a frenetic hour last Saturday, a new one and Gary Ringrose, not unlike Gordon D’Arcy a decade or so ago, gets moved into his less preferred inside-centre role. Joe Schmidt has anticipated the physical threat that the hulking, Tevita Kuridrani brings and, probably wisely, has chosen to leave Jared Payne as the defensive lynchpin at thirteen. Kuridrani somehow manages to mobilise his massive, 6 foot 4, 16 stone frame into something more volatile than advertised and is an incredibly direct and destructive runner. The Fijian-born, thirteen and his centre partner, Reece Hodge, have scored in every game on this tour so far, and will be looking to match the exploits of Mark Ella on Australia’s 1984 ‘Grand Slam Tour’. Still, this Australian team just doesn’t have the look of a ‘Grand Slam’ about them.

Wales, who are very difficult to judge at the moment, were swept aside with admirable ease, Scotland pipped at the post, and France just about repelled so it would be remiss to compare this side’s feats thus far to the exploits of Farr-Jones, Ella, Lynagh and Co. in 1984. Australia have weaknesses that Ireland will be looking to exploit, mainly at the set piece. The home side’s lineout has functioned exceptionally all month and, while Australia has chosen for the cautionary inclusion of Dean Mumm on the blindside, Devin Toner’s unit should hold the edge here.

Meanwhile, it’s probably fair to say that the scrum has surpassed all expectations this November. Jack McGrath is deservedly keeping a surging Cian Healy on the bench, while Rory Best continues to flourish in the role he was made for. However, it has been the performances of Tadhg Furlong at tighthead, an area of real concern until recently, that have given most cause for optimism. Just twenty-four, a teenager in tighthead years, the Campile man has excelled since Joe Schmidt brought him into the fold. While there were always cautious expectations that Furlong would develop into a serious player, his performances in Chicago and then a fortnight later have emphatically announced his arrival onto the international scene. The former, New Ross, youth standout thinks his ball-carrying isn’t one of his strong suits, but the strength involved in grounding three New Zealanders, including Kieran Read, would suggest otherwise. While Stephen Moore and Sekope Kepu return, it’s still advantage Ireland in the scrum. 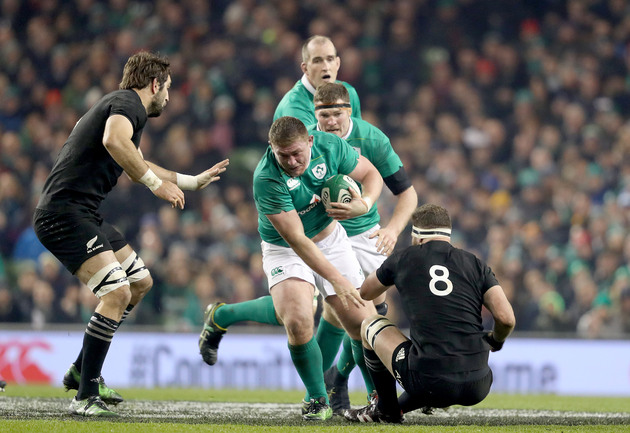 Tadhg Furlong has been immense through the early stages of his international career. (courtesy Newstalk)

So for all the explosiveness in the Australian backline, they can’t live from scraps, although they have exposed Ireland on a number of occasions with breakaways on recent visits. Still, Joe Schmidt will have drilled the importance of ball protection into his players all week long, so you suspect an incident like the unfortunate, Luke Marshall’s against Canada would be detrimental to a player’s chance of selection in the Six Nations.

On the flipside, the issue remains that for all Ireland’s evident forward dominance, the backline play can appear lacklustre with players sometimes slow to look for the offload and lateral movement often prevalent. Ringrose and Paddy Jackson were thrust into a war zone last week, and while the former found his feet,  it was difficult to make any assessment on Jackson.

In Jackson’s defence, there are few sides, if any, who would be able to attack cohesively after losing their midfield axis. New Zealand also would have struggled last week if the outstanding Beauden Barrett and Anton-Lienert Brown had departed so early. The Belfast man is a technically gifted player who performs consistently well for Ulster, but Saturday offers a serious opportunity to quieten the Carberry uprising, for now, and take control of this slightly new-look Irish backline. Coaches pore endlessly over previous games and sessions to find the right combinations and then, sometimes, an injury comes along and forces a new one upon you. Jackson, a slick passer, and the fleet-footed Ringrose might just unlock an Australian midfield that will know little of them. Of course, to earn the right to play, the young Irish will have to be ready for Hodge, Kuridrani and whatever else the resurgent Bernard Foley throws at them. 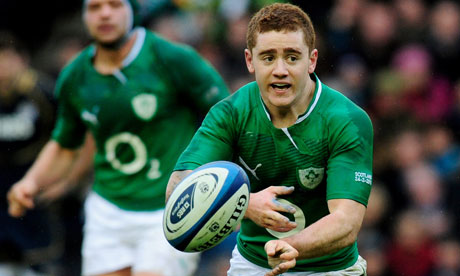 Paddy Jackson’s performance tomorrow will have a huge bearing on Six Nations selection.

If someone said to you on 1st November that Ireland would win two tests in the month, you’d shrug relatively happily and think, a win against Australia should always be savoured. Now, Chicago has happened and everything has changed. Defeat against Australia would bring a sense of deflation to the month’s end which, while unfair, is only natural. Beating New Zealand thrusts a side into the role of favourites and this is a position with which Ireland need to become more comfortable, particularly against their more illustrious rivals.

Australia are rising from a low ebb and the past three weeks will have rejuvenated Michael Cheika’s side. Further, the visitors would never be readily associated with terms such as ‘low self-esteem’ and they’ll fancy a crack off a side who are close to breaking up the southern hegemony.

Tomorrow requires one more massive push from Ireland after last week’s unusually, intense contest. Win and this will be the most successful winter in Irish rugby history. There’s just about enough left in the tank.