35-0 with 32 victories by way of knockout. Twenty-two stoppages in a row. Gennady Golovkin’s professional record is almost impossible to compute. Yesterday’s second round destruction of Dominic Wade has merely added further substance to the mystique surrounding the California-based Kazakh .

In a week where the most tedious and highly documented pissing contest in sports history took centre stage, one could be forgiven for failing to notice that boxing’s star attraction was entertaining his adopted Inglewood crowd with another display of otherworldly punching power.

The well-traversed narrative surrounding GGG is that his phenomenal offence has the majority of the middleweight divisions running scared. And, in a sense this is true. There are two things that boxers are very fond of: money and not getting their faces caved in. And, therein lies the conundrum. A fight with GGG could end quickly for the likes of Miguel Cotto, Saul Alvarez – in the hands of the deceptively slimy Oscar de la Hoya – or even Billie Joe Saunders, but there is potential for a huge payday.

The only in-ring mystery surrounding Golovkin – whose brothers made him street fight strangers as a child –  is how his defence would hold up against the aforementioned fighters. It may be that the thirty-four-year-olds power, like prime-Tyson, would sap the vitality of his challengers leaving the question surrounding his defence a largely perfunctory issue. In any event, Golovkin is yet to hit the canvas after more than 350 fights between the amateur and professional ranks, so his otherworldly toughness is probably his strongest defensive tool.

Those in the know, including Frank Lotierzo of thesweetscience.com describe Golovkin as merely an “adequate boxer”, in the truly technical sense, but his devastating power allows him to chip away at his opponent’s resistance and then unload relentlessly. Also, his armoury runs deep so an opponent could be caught with a thunderous left hook, overhead right or a night-ending body shot.

The detractors will say that Golovkin is only beating ‘bums’, yet with the exception of Andy Lee, nobody in the top ten is willing to take a shot at the world’s number three pound-for-pound boxer. Fourth-ranked David Lemieux already took his chance in a unification bout and the only surprise that night was that Lemieux lasted into the eighth round.

We’re sorry for bleating like a particularly bolshy broken record, but boxing’s inner-politics shouldn’t just be accepted with a resigned sigh and shrug of the shoulders. There is something intrinsically wrong with this great sport when the combatants are allowed to run and take cover behind the bull shit of Frank Warren or de la Hoya.

This week, Conor McGregor, his level-headed social media following and Dana White have created an embarrassing situation, but for the most part, MMA should be lauded for ensuring that the champion always fights the next guy in line. Unless, ironically, your name is Conor McGregor and the featherweight division is set in limbo, though one suspects White and the UFC may not be so accommodating going forwards. Anyway, we digress, but the point here is Golovkin would long since have fought Alvarez or Cotto if logic was allowed prevail.

Boxing was, of course, ruptured in the 80s when new Associations, Federations and Organisations starting appearing at an inordinate rate, fracturing the sport and creating pockets of vested interests. While belts are important, Golovkin’s uniquely frustrating situation shows that the real power lies with promoters and their desire to protect their golden tickets.

De la Hoya knows that the lion’s share of PPV purchases come from the sizable, loyal Mexican boxing fraternity. Alvarez, originally a big, solid welterweight and the current lineal champion – a concept that seems to have been created by the Mad Hatter – of the middleweight division is Golden Boy Promotions gateway to Mexican fight fans, and with Mayweather most likely gone to pasture, De la Hoya has wasted no time in declaring ‘Canelo’ as boxing’s prime attraction. 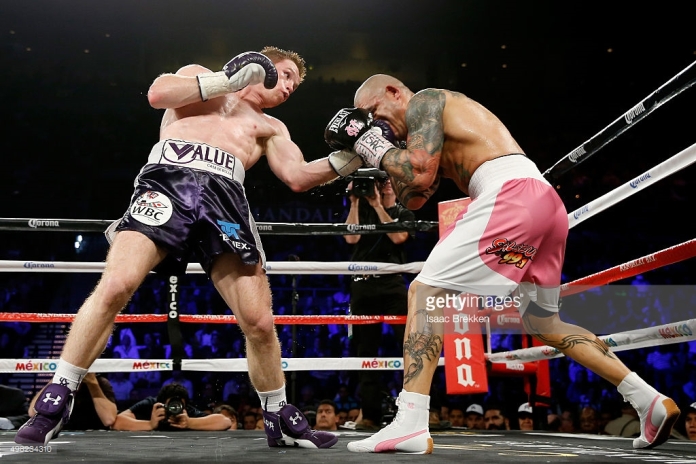 Alvarez squares off against Amir Khan on May 9th and logic would suggest the winner, most likely the current WBC champion will advance to face GGG in the super-fight of 2016. Khan, a welterweight is also being forced to jump through hoops –admittedly aided by some very alluring financial incentives- by Golden Boy as he’ll be jumping nine pounds to 156 pounds to make ‘Canelo’s’ job more palatable. Seriously, the ‘heels’ in WWE don’t have things stacked this heavily in their favour.

So, rather unsurprisingly, and in a quirk that will irritate fans and detractors of boxing in equal measure, Alvarez has indicated that any showdown with GGG will take place at a catch weight of 155 pounds. In effect, the champion at 160 is making his most dangerous rival drop five pounds of power. Alvarez defends very effectively at junior middleweight, but Golovkin is a bona fide middleweight and given his supposed technical deficiencies, he would be dispensing with logic in meeting Alvarez’ demands.

Trainer Abel Sanchez and, more so, promoter Tom Loeffler, have worked tirelessly and patiently to generate Golovkin’s fan base on the U.S. west coast so it would seem most unlikely that they would allow their once in a generation star dispense with his ‘superpower’. This being the case, Alvarez or Cotto will need to man up or Saunders or the dangerous Daniel Jacobs will need to step their games up considerably. The chance may have come and gone for Andy Lee, but boxing is nothing if not unpredictable, so who knows.

One thing is for certain, however. For all his notoriety and box office draw, Mayweather was jarringly boring to watch, due to his sublime defense and hand speed. Now retired, his void needs to be filled by a freewheeling wrecking-ball, and not another defensive whizz. Sanchez has instilled the cavalier, come-forward stylings of Mexican greats like Julio Cesar Chavez into his already outrageously, powerful charge, and fight fans have responded accordingly.

Trainer Abel Sanchez has successfully instilled in his man the stylings of the legendary Mexican hall-of-famer, Julio Cesar Chavez.

Golovkin is a young 34, insofar as his fights are usually brief, whirlwind affairs, but a boxer’s speed is probably the first thing to go and it would be shameful if bureaucracy prevents him from giving the fans what they want and what boxing needs. Anyone who watched the abominable Mayweather-Pacquiao fight last May will know the importance of boxers facing off in their prime.

Only 25, perhaps Alvarez – see De la Hoya – is scared of damaging his legacy, but the greats, like Hagler, Hearns, Leonard and Duran never turned a big fight down. Golovkin has taken out every last bit of fodder in the lower reaches of the middleweight division. The time has come for the best to show their true colours.