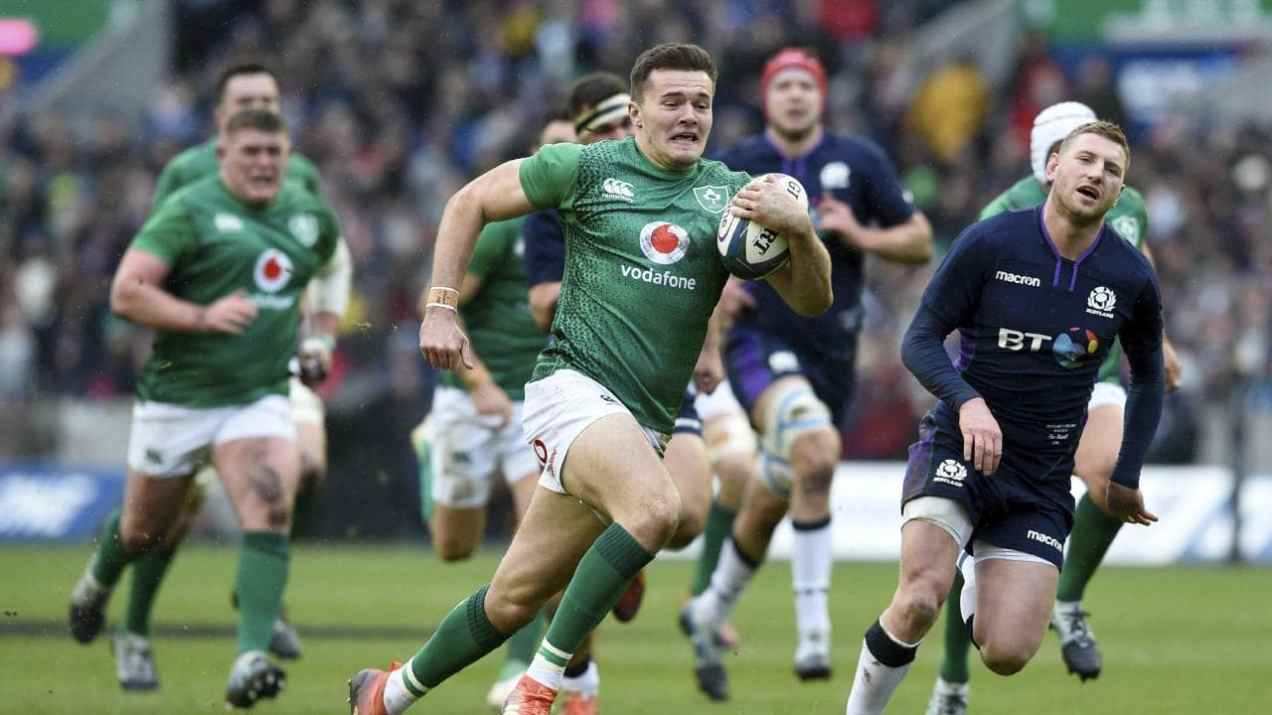 After four months of initial despondence and then roundly boring and pointless debates, the Six Nations has come round and with it, a quiet sense of optimism for the national team.

Wigan rugby-league legend, Andy Farrell begins his reign in slightly different circumstances to his predecessor, Joe Schmidt. The New Zealander arrived in the wake of a hugely disappointing 2013 Six Nations for Declan Kidney, that culminated in a calamitous defeat in Rome and the death knell for the Kidney era.

We all know what happened last October as New Zealand subjected Ireland to 80 humiliating minutes and an abject, though not unexpected, exit from the 2019 World Cup. However, unlike those who went before him, Schmidt never had to worry about the plank, walking long before any difficult decisions had to be made.

Perhaps with a nod to the continuity synonomous with New Zealand, the IRFU chose from within, appointing fomer dual-code English international, Andy Farrell, to his first head coaching role. Farrell, of course, formed an integral part of Schmidt’s coaching staff, tasked with varying success at overseeing the Irish defence. In addition, Farrell was Stuart Lancaster’s right-hand man during England’s ill-fated World Cup on home soil in 2015.

Farrell comes in under relatively little fanfare, perhaps a combination of supporter fatigue from the World Cup and concerns that our ceiling on the world stage has now been established, Also, given the paramount importance given to the four year World Cup cycle, it’s difficult to get excited for the first Six Nations post- World Cup.

The sniping and general sense of disappointment that followed the World Cup eventually dissipated with a round acknowledgement that Joe Schmidt was indeed the best Irish coach to date. That he was the most successful did not require anyone’s view or opinion.

Nonetheless, all and sundry felt that the players at Schmidt’s disposal were not, perhaps, reaching their full potential. Leinster have been there or thereabouts as the best team in Europe over the last four years, Connacht rejuvenated and Munster, though berated for not being Leinster, back to back European and Pro-14 semi-finalists.

Ulster have admittedly gone thorugh an extremely difficult period, highlighted by the criminal trial involving ex-Irish internationals, Paddy Jackson and Stuart Olding. However, the province have come out the other side and will, you feel, be significant contributors to Farrell’s squads in the coming years.

While the sounds from pundits, who have never watched a Farrell coached side, are that Ireland will attempt a more expansive game, it really will be a case of wait and see. His coaching team is comprised of Mike Catt (attack), Simon Easterby (defence) and John Fogarty (scrum coach). Catt hardly excelled with Italy, Easterby takes up an entirely new role and this is Fogarty’s first role with an international squad so one suspects the coaching unit will take longer to gel than those on field.

Speaking this week, Farrell harked back to a time when Irish teams brought unbridled passion and intensity to the pitch, making obvious reference to the Croke Park performance in 2007. However, people were almost sneered at if they mentioned these qualities in the latter period of Schmidt’s tenure.

There is almost a sense that modern Irish players are too intelligent to be relying on emotion, yet at the same time we are repeatedly fed the line about the passion that Munster display in Thomond Park. Also, how can people endlessly peddle the virtues of sports psychology while simultaneously deriding the relevance of emotion?

There’s no doubt that modern players must be so well prepared and video analaysis plays an integral role but we are repeatedly told that defence is grounded in attitude so a return to an aggressive line speed would be a welcome sight on Saturday.

Having said all that, some green shoots have sprung and while Farrell hasn’t been as adventurous as some first expected, it’s heartening to see new caps being handed out to two players, Caelan Doris and Ronán Kelleher.

Mayo native Doris has taken the club game by storm this season and there’s a sense that the 20 year-old could be in a position to assume the mantle left vacant since Sean O’ Brien’s departure. If Farrell does want Ireland to return to their rugged roots, Doris and CJ Stander will have to be to the forefront of this movement.

It’s interesting that the Irish team now has the look it once had in the 2000s, except that the foundational power now comes from the Leinster pack and not that of Munster. Indeed, there are eight Leinster forwards in the match day squad and the only reason their most consistent forward of the last two years won’t appear is becuase he’s Australian.

For the first time in a while there is genuine pressure on Cian Healy and Tadhg Furlong from David Kilcoyne and Andrew Porter. Kilcoyne’s charge has been momentarily halted by injury while Furlong has recently returned to form and it’s not like there had been a precipitous drop in his form.

Which takes us to the selection which let to the most debate in the last month, scrum-half. John Cooney’s form for Ulster has been irresistible and scoring tries will naturally bring plaudits for a player. However, rugby media and coaches love to draw on past performance – how many times was Rob Kearney’s performance in Chicago mentioned in the subsequent three years – and Murray ticks all the boxes here.

Farrell has extensive experience of coaching the Munster man and his partnership with Sexton can’t be overlooked. And, while the Ospreys can’t be used as a reliable measuring stick, Murray did show a return to previous from in Munster’s comfortable victory a fortnight ago. The reality, though, is that Murray will probably have to play his way out of this team and Cooney’s chance may not materialise, particularly as he is only a year younger than Murray, at 29.

Jordan Larmour and Andrew Conway, Ireland’s outstanding though ignored players at the World Cup, come in at the back, while Jacob Stockdale has injury to thank for an opportunity to regain his form of 2018. Will Addison appears to have been ruled out through a niggle and there is a fear that he could potentially be prone to the same injury misfortune which has befallen Joey Carberry.

With a fully stacked deck, Bundee Aki, Ireland’s most consistent perfomer in midfield over the last 18 months gets the nod ahead of Robbie Henshaw and few could argue.

Garry Ringrose has been outstanding this seaon and if this back line really do have licence to take chances or think for themselves, or whatever it is they couldn’t or wouldn’t do last season, then the results should be pleasantly surprising.

While Ireland have quietly regenerated, Saturday’s visitors, Scotland, arrive into the tournment opener in relative disarray. Finn Russell, the tournaments’s best attacking player, has been sent back to Paris after an ill-judged, solo piss-up last week.

To be fair to Russell, everyone knows that Sunday pints are particularly tasty. However, they’re best enjoyed in the company of others and ideally not in the bar in front of your boss, especially when work the next day involves getting battered on a rugby pitch and not lurking behind a computer.

Russell is replaced by Glasgow’s, Adam Hastings. Scotland’s remit is to attack and Hastings will attempt this but Russell is an undoubted loss. That said, no amount of back line talent will rectify Sotland’s problems up front.

The Scotish squad isn’t quite in disarray but Russell’s actions, which if stories are to be believed are baffling to say the least, have left the side in quite a predicament. Outmuscled by Ireland and filleted by Japan, the Scots went home from the World Cup with their tails firmly between their legs.

Scotland, its administrators rather than players, came out of the World Cup looking like utter clowns. SRU chief executive, Mark Dodson, suggested that the abandoning of their game against Japan could make Scotland “collateral damage” to the fallout of the typhoon. Anyway, amidst the genuine devestation that befell the country in the wake of the typhoon, the game went ahead, Scotland lost and some form of karma endured.

Townsend has been inclined to curb some of Scotland’s proclivites towards the cavalier and it will be interesting to see whether this provides some much needed stability or whether their game falls away once their attacking instincts are blunted. If the Scottish set piece hasn’t improved then the result from five months ago should be repeated.

Farrell couldn’t ask for a much easier opening fixture for his tenure – he would be forced to make wholesale changes if Italy were in town – and anything outside of an Irish victory, and a comfortable one at that, seems most unlikely.

Don’t expect the wheel to be reinvented but a sharper, more engaged backline should reap the dividends earned by Ireland’s superior pack.

The crowd can do their bit too and prove they’re not just in for the good times. And, while tougher days lie ahead for all concerned, Ireland should take up from they left off in Yokohama.