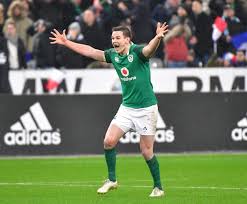 What a difference a backbreaking 41 phase sequence of plays topped off by an outrageous drop goal makes. All the contradictions of the best, annual international rugby tournament were on display last Saturday evening in Paris.

On one hand, you have the glass half empty crowd who said Johnny Sexton’s 45-metre goal drop goal was only a mask of Ireland’s considerable deficiencies. Alternatively, you had an incredibly composed phase of play that saw every single Irish player touch the ball and that was punctuated by a daring cross-kick from Sexton, superb leap and carry from Earls and of course the unerring shot from Sexton.

Whatever way you look at it, Ireland had an atrocious record in Paris, shot themselves in the foot at times, were thwarted by a slightly erratic performance from Nigel Owens yet rather than going down in a blaze of bitter recriminations put together the most patient game-winning drive in Irish, international rugby history.

Ireland have pulled off some remarkable victories down the years but Saturday was our first ever walk-off victory. And, to borrow further from baseball parlance, Johnny Sexton stood at the plate with a full count, two outs and no runners on. And, a pack that was about to die on its feet.

What’s important to remember, amidst our negativity surrounding the manner in which Ireland almost let the game slip, is that they pulled it out of the fire in barely believable circumstances.

Think about it. Lashing rain, the flightiest fans in world rugby suddenly buoyed by Teddy Thomas’ individual brilliance and a crushing scrum penalty, missed of course by Belleau. Allied to this was the fact that Ireland, though largely dominant, had yet to make a line break and were now after going more than three hours without a try in Paris. Nothing suggested Ireland were going to find a miraculous winning score.

But between Sexton’s obvious interventions, the extraordinary 34 combined involvements of CJ Stander and Ian Henderson in the last four minutes and a collective will to endure, Ireland prevailed. Of course, there’s plenty to work on but for Irish fans, particularly those who witnessed the ruthless brilliance of Sella, Blanco and Rives, victory in Paris is to be savoured. Indeed, our three victories there in the professional era have come by a total of six points, and have ultimately been decided by a late, late David Humphreys penalty, a questionable scrum decision and Sexton’s bomb.

To go back to Stander and Henderson, they are the prototypical forward required in Joe Schmidt’s high possession, bludgeoning game plan. Both appear high on the list of tackles and carries in every game, not to mention the more subtle stats, and are now vital components of this Irish side. Stander, though a very different player to Jamie Heaslip, is as unerringly ubiquitous as the latter on the field and though the explosive carries of two years ago are a rare sight now, his importance to the team cannot be understated. Ireland’s back row depth is currently being lauded and given the current absentees, this is with good reason, but the loss of Stander would be keenly felt.

With this in mind, it would seem that Stander has been saved for a cameo role on Saturday when Conor O’ Shea’s Italian side come to town. Jack Conan, so extraordinary in the latter half of last season for Leinster, gets an opportunity to impress in a Six Nations environment, and this week’s game will probably offer a decent opportunity for the 24-year-old to show his value in the open field.

Schmidt has shown due respect to the Italians with Conan’s selection the only one unenforced in the starting fifteen with James Ryan reportedly suffering a minor strain after his superb Six Nations debut. Alongside Conan, Dan Leavy, the nominal third-choice Irish openside will also relish the opportunity to explore open spaces after an hour of trench warfare in the Stade de France. This is not to disrespect Italy and while the hiding to nothing line will be wheeled out, Ireland will be expected to win well, while playing effectively within the parameters of their coach’s game. This is multi-phase, high-pressure rugby which ideally presents opportunities for a back three largely starved of opportunities a week ago.

There were early glimmers of the potential of an attacking tandem of Jacob Stockdale and Earls and with Jordan Larmour now seemingly breathing down the back three’s necks, the hope is that they get the opportunity to express themselves a little and deliver accordingly.

People have taken the turns at who to blame for Teddy Thomas’ exceptional try on Saturday. Thus far, there has been Conor Murray’s rush out of the line, a failure to communicate in behind him, a poor angle by Stockdale – one sense knives were sharpened for Stockdale regardless of what he did – and a possible misread by Kearney. Add to this a blistering turn of foot by Thomas and it’s hard to really pinpoint a culprit save to say that if defensive lines and communication were faultless seventy minutes into a gruelling contest, we would never see tries scored.

Rather than lament the French try, Ireland should and no doubt have focused on the fact that they were once more unable to breach the French line in Paris. While the French attack has largely faltered in recent seasons, their defence has remained of the highest calibre, particularly when playing at home. Italy, do not possess such a stern bulwark.

As the traditional floodgate opening took place last Sunday afternoon in Rome, the long-held belief that Italy has not advanced beyond a 60-minute team was substantiated. Though highly impressive at times in the first half, they were the architects of their own downfall – trademark Charles Stewart Parnell – when a forward pass denied a certain try and prefaced the late English onslaught.

Italy won’t be quite as buoyant for their first away trip of the campaign and Ireland will expect a vastly different contest this weekend. Schmidt and his side are not naïve enough to expect the visitors to crumble but given Andy Farrell’s defence was only breached by a moment of brilliance, it’s hard to see where the Italians will create trouble.

One area which has quietly been discussed of late has been Ireland’s inability to breach midfield and despite the paucity of traditional second centre, jinking breaks in the modern game, these concerns are not without foundation. Robbie Henshaw is an outstanding defender, a tireless carrier of the ball and a player who never seems to have a bad game. Notwithstanding these facts, however, he has yet to hit the offensive heights enjoyed both as a fullback and centre at Connacht and in the latter position for Leinster. And, even accounting for the difficulties of breaching the middle in the international game, Ireland offer perhaps offer the least threat of any of the top teams in the Six Nations in this regard. 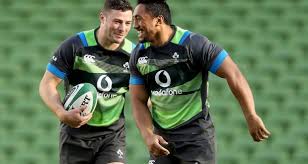 Robbie Henshaw and Bundee Aki have an opportunity to provide some much-needed midfield, attacking thrust.

The expectation, however, is that the damage will be done in the tight by Conan, Henderson and Murray and ultimately out wide by Earls and Stockdale. England’s Anthony Watson laid down the marker last Sunday with some blistering pace and powerful finishing so his Irish counterparts will relish the opportunity to make hay while the wintry sun shines.

Of course, the main attraction tomorrow, Jordan Larmour, will most likely spend the first hour on the bench. If given the opportunity to enter the game at fullback, the excitement in the crowd will be palpable and, though our expectations are generally excessive in these situations, these type of players do not come along very often, especially in Ireland.

Frankly, it’s difficult not to get excited when one considers the 20-year-old’s performances against Ulster twice and Munster in this years Pro-14. However, Larmour is now going to play effectively two levels up from the scene of his wondrous attacking performances. Solid if unspectacular in his Champions Cup performances, the standard is upped again, though not so much on Saturday. If you want a good insight into how heavy an expectation has been placed on Larmour to deliver, he is currently well under odds-on to score, despite being uncapped and coming off the bench.

You don’t want to sound trite but after last week’s endgame, there is sense that Irish supporters would love Wales or Scotland to be coming to town this weekend. Then, you remember that it matters little what we think and that the players went through both a physically and mentally gruelling contest only days ago. If last week proved anything, it’s that wins trump performances every time in the Six Nations.

Some bodies will be rested while others get a chance to shine on the front foot. And, perhaps, we’ll look on this game as the day an international star was born.

Straight Up Sport Prediction: Ireland by 30+

Tips: Stockdale, Earls and Larmour all to score: 3/1

2 thoughts on “Ireland v Italy Preview: All aboard the Larmour Train”