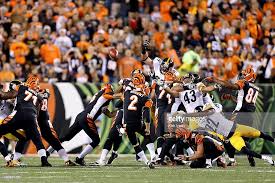 It seems that this year’s NFL playoff have arrived more quickly than usual.  Ordinarily this is as a result of 17 weeks of thrilling football, in what by modern standards is a very short season. However, even the most ardent NFL fan would struggle to argue that this has been a good season.

The obsession with Deflategate carried into the first three weeks of the season and, as usual, the limelight shifted to the most over paid man in sport – apart from Winston Bogarde, of course –  Roger Goodell. Goodell reportedly earned €44.2 million in 2015, a reward for his incomparable, gross incompetence.

Roger Goodell: At €44 million a year, this kind of arrogance and incompetence doesn’t come cheap.

We digress here but, for a bit of perspective here, the Deflategate witch-hunt, at 107 days, took longer than the following events: (courtesy of yourteamcheats.com)

Interestingly, it has recently come to light that the most perfect man in football, Peyton Manning, has been the subject of an Al-Jazeera investigation which suggests that Manning may have been taking HGH. But, the extraordinarily subjective US media has completely ignored the story. Except in Boston, unsurprisingly!

Now at this stage, it is merely a swirling investigation but proper journalism demands that these claims be examined at length. Manning may be completely innocent, but it is not the right of biased commentators to simply sweep the claim under the carpet. You can be sure Tom Brady wouldn’t be afforded the same luxury.

Anyway, the playoffs – broken down here –  have arrived, and Week One means the Wildcard round. The regular season may have been instantly forgettable but this week promises perhaps the closest round of wildcard games in recent memory.

Tonight’s game sees AFC South champions Houston Texans host Kansas City Chiefs, runners-up in the AFC West. The Texans’ JJ Watt is, without question, the most freakishly talented and destructive defensive player in the NFL. Watt has averaged 15 sacks a season since entering the league and while his stats are extremely impressive, metrics can’t take into account the sheer terror that he implants in opposing quarterbacks.

Watt forms part of an extremely impressive Houston defensive unit, which also includes linebacker, Brian Cushing, shutdown cornerback Jonathan Joseph, and, we have to include him because of his incredible name, Whitney Mercilus. It’s all about ground and pound in Houston.

The offense is marshalled by Brian Hoyer, a no-frills, journeyman quarterback. It would be remiss of us to describe Hoyer as anything other than solid. That said, he is fortunate enough to possess one of the most talented wide receivers in the league, in DeAndre Hopkins. Despite being hampered by a bog-standard, quarterback, Hopkins finished the season third in receiving yards this season, with 1521 yards.

Hopkins is without question the main threat but on the other side, Nate Washington offers a reasonable option in terms of a release valve. Star running back, Arian Foster has been lost for the season and that has really hampered the Texans running game.

On the other side are the Kansas City Chiefs, a side who, like the Texans rely on a dominant defense and a solid quarterback in Alex Smith. Smith has had a strange career to date. Picked first in the 2005 draft by the San Francisco 49ers – ahead of future hall-of-famer, Aaron Rodgers – Smith muddled through his first years in the Bay Area before the arrival of head coach, Jim Harbaugh, the NFL equivalent of Jose Mourinho.

Harbaugh tweaked Smith’s game, with the quarterback becoming the game-manager – talented quarterback who knows his limitations – for the 49ers. His greatest ever performance came in the 2011 playoffs when Smith led the ‘9ers to a dramatic victory over the highly fancied New Orleans Saints.

Harbaugh promptly dropped Smith the following season, replacing him with the second coming, Colin Kaepernick, the modern, prototype quarterback. Kaepernick is about to be cut by the atrocious 49ers, while Smith is once more in the playoffs. So, basically, Jim Harbaugh is a dickhead. 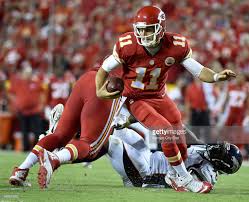 Alex Smith, one of the good guys, needs to make some deep throws tonight.

Smith is unquestionably superior to Hoyer. In fact, the best compliment we could pay the former is to say that he is the NFL equivalent of Danny Murphy. However, he doesn’t make enough big plays and the Texans are virtually impenetrable on deep plays.

This game is extraordinarily hard to call as the sides are very equally matched in most departments. Neither team scores heavily so expect a grim, old-fashioned slobberknocker. The Texans have home court but the Chiefs are on an NFL-best, ten-game winning streak.

Toss of a coin, and with zero confidence, Chiefs by 3.

Since the death of the once-great Baltimore Ravens, Pittsburgh and Cincy’ has become the primary rivalry in the AFC North. The Bengals topped the division this year, with the Steelers securing the final wildcard spot after the New York Jets final day defeat.

The Steelers are NFL blue-bloods, having won six Superbowls – four in the 70s and two more recently – and until very recently held a complete stranglehold over the former laughing-stock, Bengals.

However, under head coach, Marvin Lewis, the Bengals have become a genuine force in the NFL. A genuine force during the regular season, that is. Cincinnati rips it up from September to December but, come playoff time they have been nothing short of atrocious with Lewis at the helm. Since 2009, he has led the side to the playoffs five times. In that time the Bengals are winless.

There are various reasons: inexperience, lack of composure and the ‘Red Rifle’, Andy Dalton. Now, Dalton is a fine, and admittedly ever-improving, quarterback but his performances in the playoffs have been less-than-zero. This year, however, a broken thumb means Dalton won’t start – at least this week – with the starting job going to second-year quarterback, AJ McCarron.

McCarron is good, not great, which can only be expected from a quarterback who, up until a few weeks ago probably thought he had as much chance of winning the starting job as lil’ Matt Saracen. Dalton has repeatedly failed in the sudden death games so while he’s clearly superior to McCarron on the basis of metrics, it’s hard to argue that his loss will be felt.

While we are being a little facetious it may the case that McCarron rises to the occasion on his home field tonight, as he has had a month to settle into not only his team’s system but the role of a QB1 in the NFL.

Further, in A.J. Green he has one of the greatest scoring threats in the NFL. Green can pull off some pretty amazing plays and if Pittsburgh goes for double-coverage, McCarron can look to red zone monster, Tyler Eifert and the back-up cast of Mohammed Sanu and Marvin Jones.

In addition, the Bengals have the enigmatic Giovanni Bernard and Jeremy Hill – whose 2015 has admittedly been disappointing – in the backfield to keep the Steelers defence on its toes, in the trenches.

The Steelers, so long famed for their intimidating defence have become the NFL’s must-watch team. Veteran shot-caller Ben Roethlisberger, already with two Superbowl rings to his name, has the most frighteningly talented receiving corps in the league. Antonio Brown is the best wideout in the league, while Martavis Bryant is arguably the best deep-threat in the playoffs.

However, the Steelers have a serious problem in the engine room. La’Veon Bell, their starting running-back was ruled out for the season months ago, while, it has been revealed that his replacement, DeAngelo Williams will not play tonight. Step forward, Fitzgerald Toussaint, he of the 54 career rushing yards.

No rational person could suggest that Toussaint is going to deliver on his first career start, in the playoffs, on the road to Pittsburgh’s biggest rivals. Roethlisberger is a wizened, badass but there’s very little he can do to protect his young running-back.

NFL commentators like to say that you’ve got to establish the run first before you go to your passing game. If you don’t run the ball, you’ll face longer passing plays, while the defence will drop more players back to defend against the opposing quarterback. Basically, if the Steelers run game fails to materialise, their season will be over.

It would be ludicrous to write off ‘Big Ben’ and his cohort of playmakers but the Bengals are no slouches in defending the pass, and if they get on top early, in front of a raucous home crowd, the game could get away from the Steelers.

Despite being favourite, the Pittsburgh Steelers will need ‘Big Ben’ Roethlisberger to call on all his big game experience in Cincinnati tonight.

Bookmakers have the home side as three-point underdogs which is understandable, given their history and the fact that McCarron is under centre but we feel the Bengals are being denied the respect they deserve.

All going well, this one should get pretty fiery so, expect both quarterbacks to get plenty of attention. We’re going against conventional wisdom and with our gut on this one.

The long-suffering Bengals to end their playoff misery.