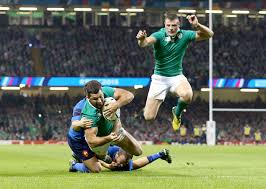 As with Ronan O’ Gara, his Munster teammate of many a year, there was no fairytale ending for Paul O’ Connell in the green of Ireland. For all that he has given of himself and to his team mates, life, the cruel bastard that this it is, chose an agonising twist at the end of O’ Connell’s remarkable, thirteen-year international career. It’s been almost impossible not to get caught up in the outpouring of emotion that has swept over the country since Sunday’s drama in Cardiff. Especially when you hear that O’ Connell had a room of his peers and friends in tears just minutes before they took to the field against France.

In barely thirty minutes our spiritual leader, our most important player and arguably our best performer in this year’s tournament -O’ Connell, Johnny Sexton and Peter O’ Mahony- went down, all during one of the biggest games in Irish World Cup history. The response from the remaining collective was beyond impressive, but we must, like the Chicago Cubs –who won their first home playoff decider in over a hundred years this week- temper our emotions with the fact that we are still ‘only’ at the quarter-final stage of the World Cup. A place we have fallen before on six occasions.

Yet, within a vacuum, last Sunday afternoon will forever remain an iconic moment in Irish sport, up there with, amongst others –these are the ones we’ve lived through and can remember- the Houghton roly-poly, Robbie beating Kahn and Shane Long’s wonder-strike. Thankfully the emotional aspect of these achievements is savoured far more lustily by the Irish support, meaning Joe Schmidt and his team, while naturally elated, would have looked to Argentina this Sunday, only minutes after Nigel Owens’ final whistle.

The injury toll is high though not insurmountable and Sean O’ Brien’s suspension is unfortunate though probably deserved. Incidentally, O’ Brien’s six foot, four inch, eighteen stone victim failed to cover himself in glory after going out of his way to try and get a lengthier ban imposed on O’ Brien . What’s that one about being able to give….? It’s a bit controversial to suggest that it’s ok to punch or slap a player. Indeed it isn’t, not nowadays. Nonetheless Pape’s relentlessness in pursuing the matter smacks of a bully who doesn’t like getting his toys taken from him, particularly with everyone watching. Anyway, it will be interesting to see where Pape’s hands go the next time he approaches O’ Brien in open country.

The greatest difficulty this weekend, aside from under-estimating the Argentinians will be trying to replicate the emotional, and more tellingly, physical intensity of last weekend. By the time Ireland had emptied themselves against the French, Argentina already had their feet up after a comfortable, if unnecessarily aggressive, victory over Namibia. The flipside, of course, is that Ireland had the most perfectly staggered build up to their group decider so it would be remiss of us to moan as soon as our highly advantageous situation has passed.

With all due respect to Keith Earls, the greatest concern throughout the week –save for the potential for thousands of Irish men breaking down in tears amidst all the Paul O’ Connell tributes- has been Johnny Sexton’s abductor and/or groin. Composed as Ian Madigan was when arriving on the pitch in Cardiff, Sexton’s presence is of immense importance to Ireland on Sunday. With the heart of the pack absent, it is imperative that our chief orchestrator remains. Argentina will target Sexton, in the same way that every single team targets opposition playmakers. If Nicholas Sanchez, Sexton’s opposite number, reaches high for a pass and Ian Henderson is in the vicinity, then Irish hopes will be that the Armagh man delivers a monstrous hit.  You do not want to see player hurt but you hope he is weakened for the next collision or slower for the next split-second decision. Crude though it may sound, it’s the truth.

Even with four games played, it is difficult to gauge just how good Argentina are. People have been quick to praise their opening night performance in defeat to New Zealand while at the same time stating that New Zealand were less than impressive on the same night. So were both good? Were neither good? Or, most likely, do the public hold the world champions to a higher standard than their Latin opponents? The latter is a dangerous approach as the Argentinians have long since outgrown the tag of plucky up-starts with one big performance per tournament in them. The reality is that Los Pumas will be approaching Sunday’s game with respect –or perhaps contempt based on past meetings- for their opponents and little else.

Oddly enough, Argentina’s perceived Achilles heel at this tournament has been a tendency to allow their play become too loose and spontaneous, incidentally just as France –in the midst of a discreet rebellion apparently- have moved in the other direction. Ireland would be delighted with such an approach as a reversion to the old-school, grindhouse play of the Argentina of World Cups past would probably present a far greater challenge to Joe Schmidt’s weary side. Logic dictates that scoring opportunities will come Ireland’s way should Argentina employ an expansive, risk-reward game plan.

We are in awkward territory once more, just as four years ago, when Warren Gatland’s red-machine ended our World Cup, in a well thought out physical coup in Wellington. As with the Australian game in 2011, the Irish public were last week able to immerse themselves in our default mode, underdog –when we really were favourites- with the French game looming. However with our nemesis of so many years and tournaments gone by vanquished, Ireland arrive into Sunday’s encounter in Cardiff with the unenviable and unshakable tag of favourites. This perception is somewhat skewed by the fact that Ireland are down three big-time players but the tag of favouritism sits justifiably on the Jamie Heaslip led team. 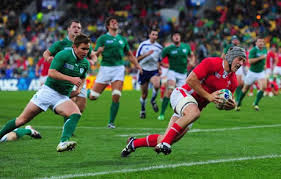 Despite, five quarter-final appearances Ireland have yet to reach a Rugby World Cup semi-final.

Full strength or not, victory on Sunday will take Ireland to unchartered territories, a world Cup semi-final. The prize is too great, too tangible and too realistic a goal to let slip. Argentina will be far more than just a willing footnote on Sunday and are no doubt savouring their low-key build-up to the quarter-final. Still, Joe Schmidt has prepared this squad meticulously and after last Sunday it seems as though they’ll need to be taken away on their shields. In other years, the injuries might have been a bridge too far. Not this time, though.

Often before we went in hope. This time, Ireland enter a brave new world, one of expectation. While favouritism may not have sat well in the past, this Sunday it will.